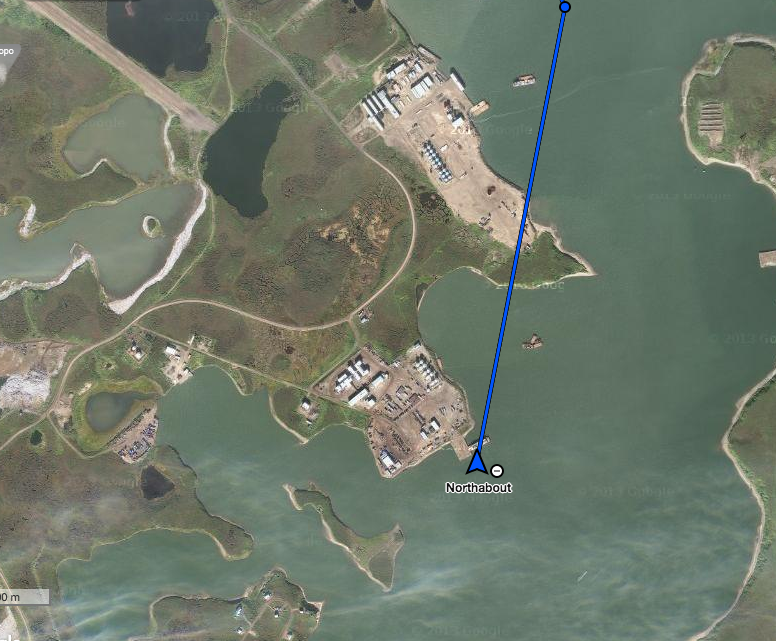 Tuktoyaktuk! Greeted by Rick the oracle and Doug the big boss

Today we slowly made our way to Tuk. Weather was kind to us  everyone excited as we got closer.

We had to get in before our fuel man went hunting, so regular calls to say we were on our way. Slowly down the channel into TUK. RicK our fuel man was waiting for us. Whilst the mundane job of getting rid of our garbage and refuelling.

Rick was the Oracle of everything this trip is about. He was born in Tuk, and has gradually seen the climate change. summers earlier by a month and winters later by a month, resulting in a huge change of lifestyle for the hunters in this area. Fascinating and absolutely terrifying change in such a short time.

So, Doug the local Big Boss came to check up on us, he soon made us aware that there were no Taxis, Hotels, Restaurants, pizza parlours, nothing. So we send Mrs Irish off with him with Comrade Nikolai  to look at another possible pontoon. So, they come back. Poor Doug had been poleaxed by Mrs Irish. We had his truck free of charge for the weekend, Oh, and his Bosses house to use, with shower and laundry and he will come and sort out our engineering problem in the mornings. We could use his company pontoon for the night.

So a great day, and finished on a high, of Spare ribs and Vodka.