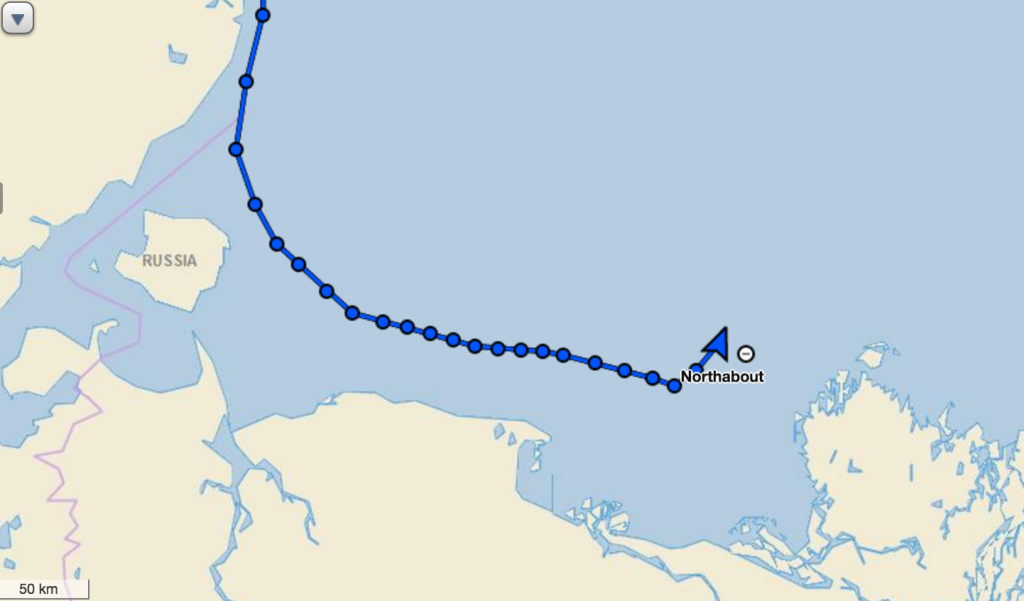 Today in my morning watch things weren’t quite as idyllic. Over night we’d sailed into ice. I know, I said we shouldn’t be troubled by ice for a bit, I was wrong. The ice on its own wasn’t too bad, the thing was we had fog as well.

So, we’re making good progress.  Yesterday we passed the four thousand mile mark.  If that was in a straight line it would mean we were a third of the way round, unfortunately with all the weaving in and out of the ice and doubling back we’ll have done a couple of hundred less than that.  But still nice in its own way.  Yesterday was ideal, we had warmish wether and calm seas, we just put the auto helm on and relaxed.  Well, sort of.  One curious thing we had to watch out for was driftwood.  For some reason or other there’s loads of wood floating about in this part of the Arctic.  And thats not just us, Nikolai said that there was usually a lot if wood in the Laptev Sea, he didn’t say why though.  I wonder if anyone knows. I saw walruses yesterday.  Not for long enough to get a picture but we sailed by three swimming along together in the water.  I’d never before appreciated how fat they are.  They look like they’re wrapped in brown leathery duvets.

Today in my morning watch things weren’t quite as idyllic.  Over night we’d sailed into ice. I know, I said we shouldn’t be troubled by ice for a bit, I was wrong.  The ice on its own wasn’t too bad, the thing was we had fog as well.  The fog was terrible, we could barely see five meters in front of the prow and the ice just kept on coming.  After a bit the fog went, thankfully, the ice didn’t.  Eight hours later when I’m back on watch we still had ice and even better, we had to divert to avoid a sandbank.  Then the fog came back, typical.  Luckily after another two and a half hours the ice began to clear a bit, for now.

Because we’ve come further south to avoid the ice we’ve got a bit of day and night back, ish, what we have is a dark patch at about two o’clock in the afternoon to eight o’clock in the evening.  The reason for the weird times is because of where we are.  Though it is easy to forget, we’re now at the same longitude as the most easterly point of India.  About.  As such the time should have been shifted forward eight hours.  However, because it’s easier to work of a fixed time we’re still operating in Murmansk time, we’ll only change this once we reach Alaska.  In the meantime we just have to put up with weird light.

Now, from the pieces I’ve seen on things like this, usually the crew or team or whatever find something really hard that they hadn’t expected to.  In this case I’m afraid what’s hardest for me is exactly what I expected to be hardest for me.  Lack of my own space.  I am not by nature a very social creature.  I like being on my own and find it difficult and tiring to interact with people.  As such, living in a small space with six other people with no real space of your own is not a position that I relish to any degree.  So rather surprisingly when I return to the UK from being in the middle of nowhere up here, the best thing about it will be to ‘get some space!’  Life’s funny like that.

I have not the faintest clue what’s going to happen tomorrow, but whatever it is I’ll write and tell you about it, bye.

Regarding the driftwood: The Lena River is one of the ten largest in the world, It goes from nearly being frozen solid in winter to amazing floods in the summer. As I recall off the top of my head, 3% of its flow occurs in January, and 40% in August. In places the water level in the Lena River rises 60 feet during the August Floods. During the floods the salinity of the Laptev Sea decreases, so much fresh water pours into it. Along with all the water comes all sorts of Siberian trees and branches.

Hey thanks for letting me (us) know!! That river is huge! and I wonder if the reduced salinity means the sea life is different too?