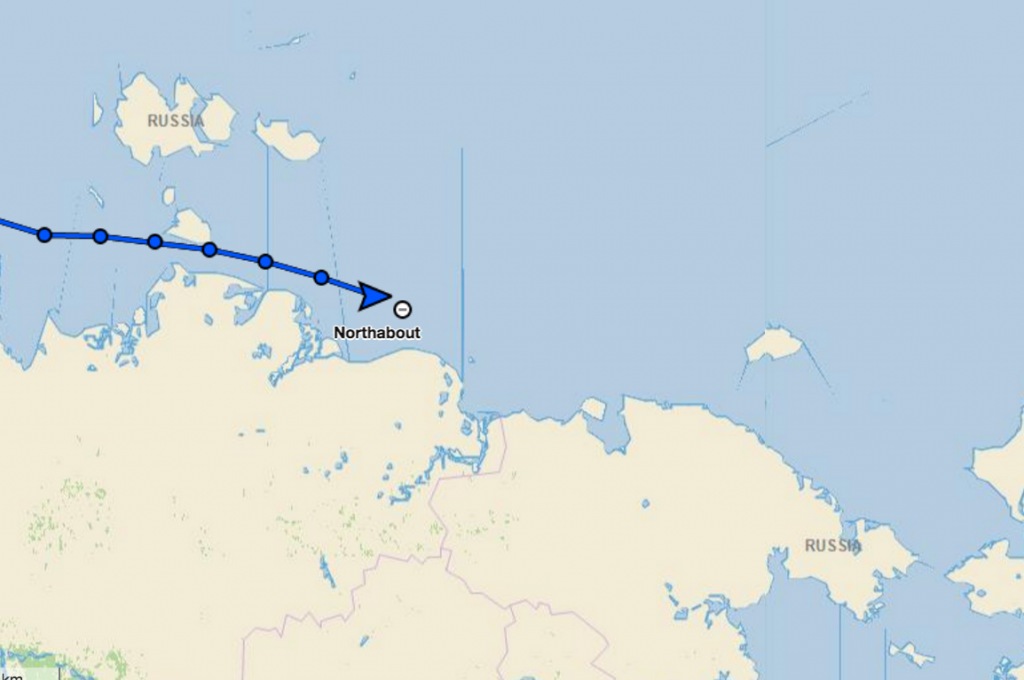 After the scare of last night, the boys did a full service on the engine & had their last shot of Vodka… now engine sounds sweet.

Early blog from me, as it’s my day to wash up after Constance, and I will be at it to Midnight !

Well after the scare of last night, the boys did a full service on the engine and oil change. Changed filters, swopped tanks, had their last shot of Vodka and started the engine. Fingers crossed again, but engine sounds sweet. We needed it today, as my first watch Zero wind. Reminded me of Murmansk all those days ago. If we didn’t have the engine we would have done just a few miles. Genoa up now and giving us some distance.

Whilst making progress, our East is slowing down. Our course it’s not straight East now, but South East. We are going a lot further South than predicted, as we have a large tongue of ice coming down to the Coast. The only way around sadly is South, hopefully that is all it will take to get through. Our last ice of the East Siberian Sea.

Of course you clever navigators will also know, that as we come South, the distance between Longitude lines is longer, and therefore more time. Hopefully after the ice, we can straight line it to Barrow.

Well the New Siberian Islands are famous historically for the Jeannette expedition of 1879 . A ship that was funded by my old friend Gordon Bennett. The idea was to try and sail to the North Pole. Well Disaster after the ship was lost, tragedy after men were lost, and courage by some who made it through to tell the tale. A gripping read.

So, this is the segway.

Parts of the Jeanette drifted across the Arctic Ocean, and came down the West Coast of Greenland. Remember, this is a time when people simply didn’t know what or where the North Pole was, or how to get there. This gave many the idea it could be a big floating Ocean with currents. The Norwegian Fridtjof Nansen commissioned the Fram to deliberately be beset in the ice and drift across the Polar Ocean. A brilliant and audacious expedition. He even got off and tried to ski to the Pole from the Fram, another brilliant read of survival. The Fram is now in a museum in Oslo.

So, my Norwegian friend Borge Ousland was inspired to do his own great sea journey on Northern Passage. He succeeded to do both passages in one season. I was asked to be on that trip and I declined. Actually, the more I do of this Passage alone, the more and more respect I have for him and Thorleif Thorleifsson.

Nice segue into the story of the Jeanette.

If Northabout’s journey inspires any of your followers to learn more about the early days of Arctic exploration, then the Woods Hole Oceanographic Institution has a very accessible portal…
http://www.whoi.edu/website/beaufortgyre/history

You are certainly correct to point out that, as you get pushed south to avoid that ice tongue, the lines of longitude get further apart. However, at your present latitude in the lowish 70’s, each degree further south adds just under 2 kms to each degree of longitude. (I can’t navigate my way across the road, but I haven’t forgotten how to use cosines.)

It is a pity nonetheless that the ice tongue prevented you from being unable to steer a great circle course. I hope that, from now onward, you have a nice, uneventful voyage across the date line and on to Leg 3

Ha !! Segue Segway LOL thanks for that, and thanks for the friendly cosine reminder that shows thats its not as longer as it feels to be ‘diverting’!