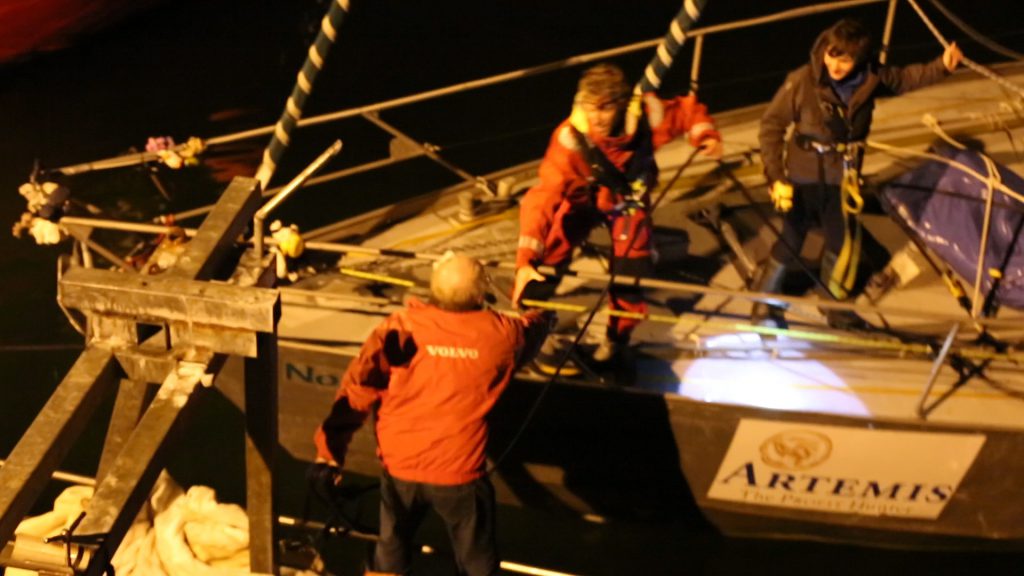 The Quay At Black Sod

Well, we should have expected it. What a welcome! Jarlath and his team were at the quay at Black Sod at 2100 as we scraped in with 0.3m under the lifted keel.
The rest of the next 4 hours is a hazy blur of handshakes, congratulations, showing people the boat, off to the pub, Guinness (ah, bliss!), singing (Dr Mike – incredible!), Guinness, photographs, singing, fiddles and concertinas, Guinness, Guinness and more Guinness…… At least I resisted the Jamesons.
When Ben decided enough was enough I wimped out and accompanied him back to the boat, cleared the two bunks in the forecabin to make room for Jarlath and Frances elsewhere aboard, and crashed out in Ben’s old bunk, as he had opted for the main saloon.

It was a good call, as the next I knew it was 0730 and the fishing boat inside us was leaving. We departed at 0800, and next stop is Westport, where Northabout was built 15 years ago.
Something tells me that last night was just a gentle introduction to Irish hospitality.
The first time I ever got drunk was in Crosshaven at the Royal Cork Yacht Club when I was 14 and had sailed with my father and three of his friends from Milford Haven in his Nic 32. That night was a blur of Guinness and Irish coffee, and the first hangover I’d ever had.
To visit ports on the west coast of Ireland after crossing the North Atlantic is a wonderful bonus on an amazing voyage. It just keeps on getting better.