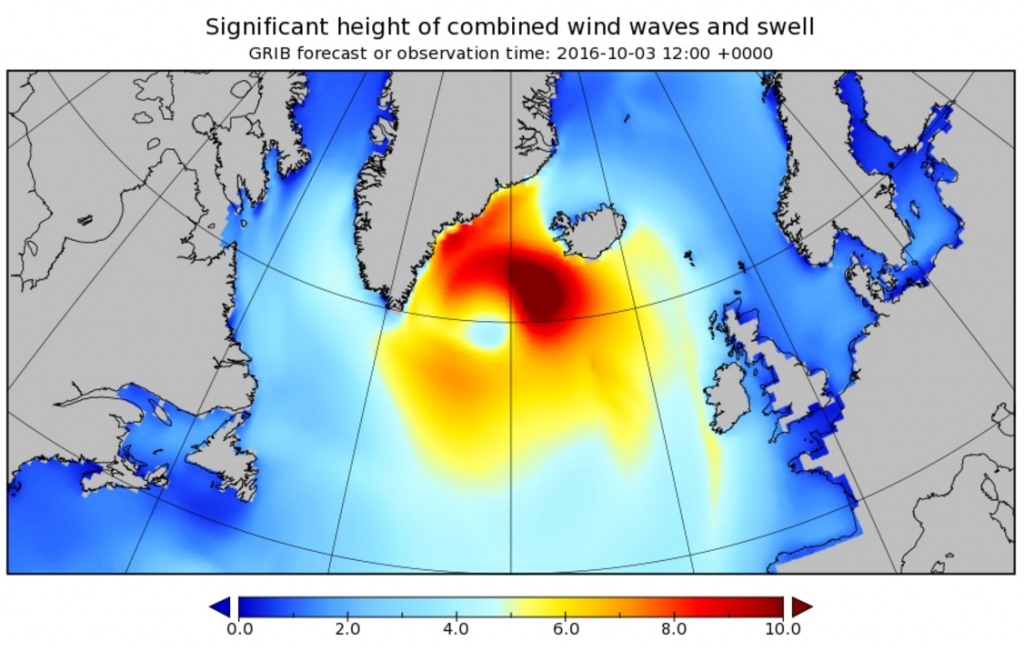 A loud “Yeehaaar!” left my mouth and was whipped away by the wind. The seas were magnificent, lashed by the wind and spewing spume from the top, as Northabout gamely reached across the tops under reefed staysail.

We are finally on our way back to Bristol!

“We left the weather station early yesterday morning in grey, wet, miserable conditions – a stark contrast to the glorious weather of the last 10 days. Maybe Greenland was trying to tell us something. My first watch was from 1400 to 1600, and was quite an experience. I attached my harness before leaving the main cabin – I leave it permanently attached in the cockpit, a tip from a recent letter in Yachting Monthly – attached the second hook to another point near the wheel, and then took over from David. Looking around at the conditions a loud “Yeehaaar!” left my mouth and was whipped away by the wind. The seas were magnificent, lashed by the wind and spewing spume from the top, as Northabout gamely reached across the tops under reefed staysail.

I vowed before this trip to savour every second to the full, and that was two hours I will remember for ever, believe it or not in a good way. The whole adventure has been amazing, but this is what it is really about.

My next watch was at 1200, and we were broadreaching under full staysail in relative comfort. I had put an extra layer of clothing on, and was warm as toast apart from my hands. My gloves were soaking, and I couldn’t find one of the spare pair, so just put up with cold wet hands as it poured with rain for the full two hours. The radar was on, and in the dark the main aim is to spot ice, but none was seen. Although there was no moonlight due to a very low cloud, visibility was a few hundred yards all around, so the breaking tops of the waves were visible as they approached.

Between watches I am tucked up in one of the three bunks in the forepeak. Mine is on the starboard side. There are two, one above the other, on the port side, and Ben’s domain is the top one. The bottom one has my kitbag and other bags packed in it. My bunk is affectionately referred to as the ‘coffin’ – it is just wide enough for my shoulders, and tapers down towards the end, which is open on one side to allow access. I had feared it would be very uncomfortable in rough seas, but I can honestly say that I have slept in great comfort for much of the last 24hrs when off watch, even though the forecabin has done a passable imitation of a container being kicked around by a fleet of JCBs.

More wind expected tonight, but not as much as yesterday, and by Thursday we expect great conditions. At least we’ve knocked off over 160 miles now.

Yeeha indeed! I have been doing quite demanding treks in the Sierra Nevada, no fear of getting wet all. No rain for months. There should be a snow cap by now but what with climate change etc. Some of the springs are drying up. Some of the mountain tracks have ravines on one side!
Glad you are having fun. Hope the hurricane steers clear of you.
X Anne

Great to hear of your progress Rob, wishing you an enjoyable trip back. Cheers Jeff

Glad you’re having fun, last time I sailed in winds like that was on a Swan 65 and a lot warmer so you’re welcome to your Yeehaaarr! Hope you get some miles in before Mathew catches up with you. Going to be a Cat 4 at Nassau on Thurs so probably up your way middle of next week so you should be close by then. Glad you have a good crew and a good boat, enjoy your coffin! Toz

Love this update Dad! I hope you have several more ‘Yeehaaars’ before this trip is over xx

Yeeeehaaar! Keep the updates coming Dad! And stay safe. The girls are tracking you xx