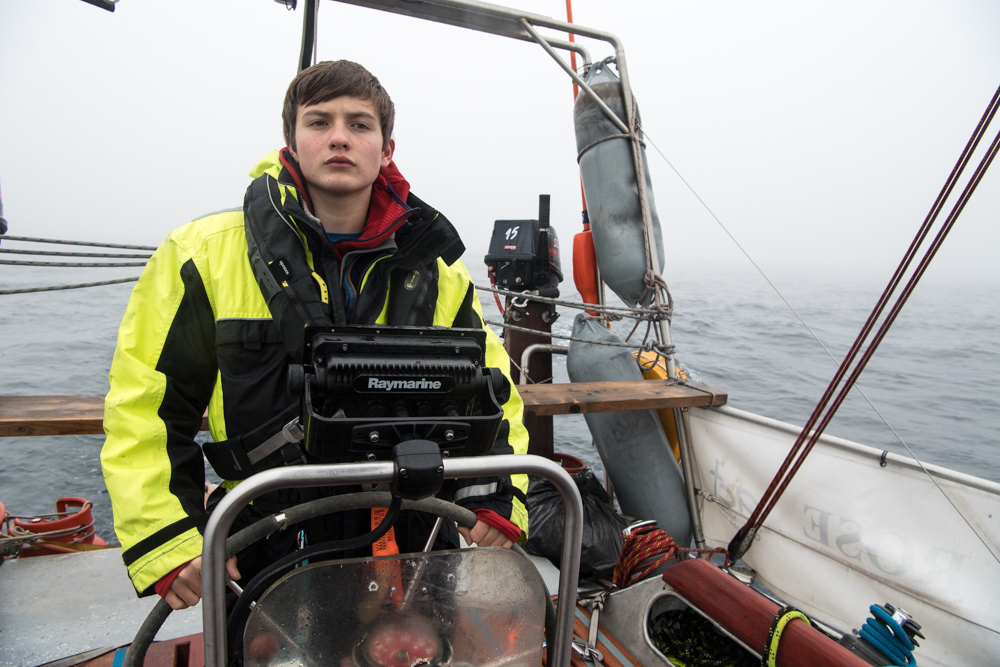 Ben Edwards, Crew, from the middle of the Beaufort Sea.

Joy of joys, the auto-helm’s stopped working.  Dad (Steve Edwards, crew), thinks he knows why so we’ll hopefully be able to fix it in Tuk.  In the meantime we’re back to helming by hand. This is a mixed blessing, on the one hand it’s really irritating to have to helm in large swells and with a strong headwind because any movement you make is at first ignored, and then exaggerated by, the wind.  So it’s hard to keep a decent track and it makes it harder to look out for ice.  On the other hand, moving and putting effort into the steering keeps you warm which is nice and it means you don’t have to put as many clothes on which is also nice because when you go down stairs and it’s twenty four degrees it can get quite uncomfortable.  I would rather have the auto-helm.  Something that is very good though is the addition of a certain Norwegian to the boat.  While Denis was nice and very good at the sailing we couldn’t really talk to him and this made life a little, not much but a little, difficult.

Johan on the other hand can speak very good english, is also a very good sailor and very nice to be around.  He’s got the attitude that I’ve come to associate with very tough, very confident with just a hint of silliness to their humour.  It’s a good combo.  Apparently pictures of me washing up have become famous back home, on that matter I would like to set the record straight. Yes I have been washing up on my days but it’s Constance Barbara and Denis that ruled the Galley on the North East Passage.  I don’t think that’s going to change, though Johan is a good cook.

I’ve got to sleep now but I’ll write again soon.  In the meantime, do svidanya.

This might be a stupid question but you are in a very remote area. How do you have Internet – it’s obviously satellites but how?!

The live tracking info comes to us via the Iridium satellite network:

That allows basic communications as well, but I suspect that Northabout carries equipment with greater bandwidth too, using Inmarsat instead:

Hopefully the Polar Ocean Challenge team will pop in later to comment on my idle speculations!

Hi yes we carry an iridium system and system capable of data transfer, we’re getting a more technical explanation from the person who set this up, sorry for the delay in replying.