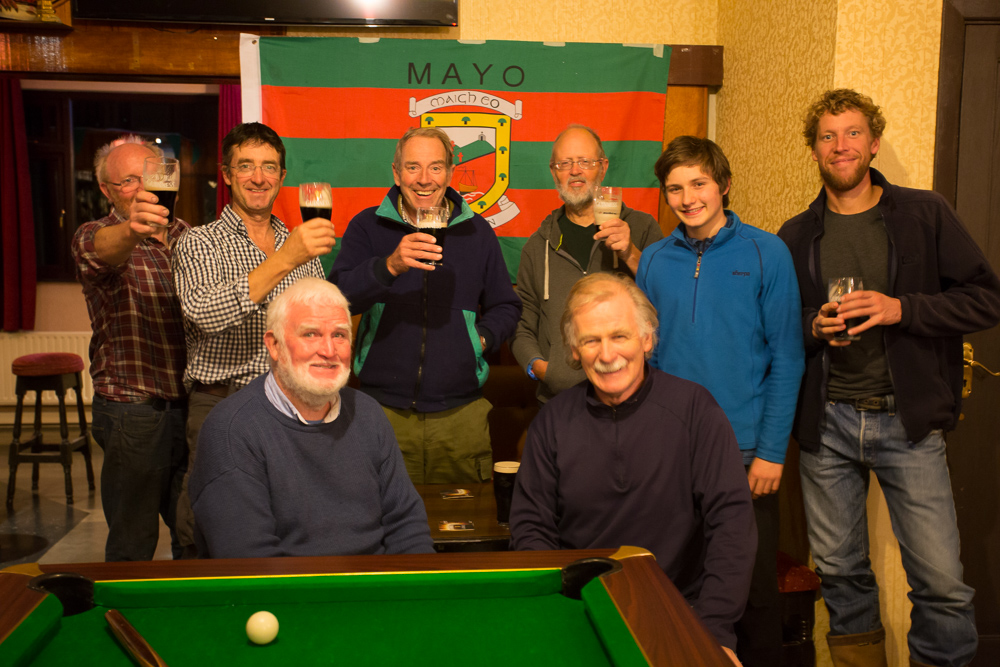 We arrived at Blacksod in darkness on Thursday evening to an unforgettable welcome from Jarlath, Mike, Tom and Mr Sweeney (the lighthouse keeper) Thankyou for your incredible help. Never to be forgotten.

We arrived at Blacksod in darkness on Thursday evening to an unforgettable welcome from Jarlath, Mike, Tom and Mr Sweeney (the lighthouse keeper).  Frances Gard was there too having hitched a lift after her Ryanair flight from Bristol.

With great enthusiasm they took our lines and promptly escorted us to a local hostelry.   By golly, Guinness is indeed good for you at times like that!  In true style, out came the fiddle and accordion with songs about Lord Franklin and other maritime disasters (all uplifting stuff!).   Yesterday we slipped Blacksod for Westport with Jarlath on board.  Bringing Northabout back to Westport, where Jarlath had built her in 2001, was a poignant moment.  RTE News and several journalists were on the quay to record the event which was subsequently aired on the national TV news last night.  Since 2001 Northabout has circumnavigated the Arctic Ocean twice, crossed over to Newfoundland, undergone two transits to the Caribbean, with a trial sail to Spitsbergen to name just a few of the passages that she has made.  The log for this expedition records a distance travelled of 10,400 nm since 19 June.

The sun is shining brightly again today although a front is expected tonight bringing heavy rain – but more importantly a wind shift.  We leave for Dingle this afternoon after a most remarkable 36 hours during which we were treated to terrific hospitality.  Many thanks to the hosting party who incidentally sailed Northabout through the NE and NW Passages over two seasons some years ago.   So they fully recognise what this expedition had achieved.  Sadly, Andrew Coulthurst is leaving us today since he has the onerous task of skippering a charter boat in Nevis for six months later this month, and needs to get organised for that.  I suspect that he needs to be fitted out in designer flip-flops and tee-shirts – a sharp contrast to the kit that we have ben wearing.  All the very best to him: we have enjoyed his company.

Specific mentions needs to be made about the significance of Blacksod in WW2.  Mr Sweeney’s father was lighthouse keeper on Black Rock in 1944.  It was he who informed General Eisenhower’s chief met officer of the break in the weather that allowed a decision to be taken to proceed with D-Day on 6 June.  That was a high risk  call since the original date of 5 June had been postponed due to high winds and swell in the Channel.  The invasion had to be planned to coincide with the full moon because of the beach landings. There is a plaque on the pier at Blacksod commemorating Mr Sweeney’s father.

The kangaroo court, referred to in previous blogs, has been delayed until we reach Dingle tomorrow.  Meanwhile, Rob is walking around as a nervous wreck in fear and trepidation as to his fate.

Thank you to all those in Blacksod and Westport for your incredible help.  Never to be forgotten.