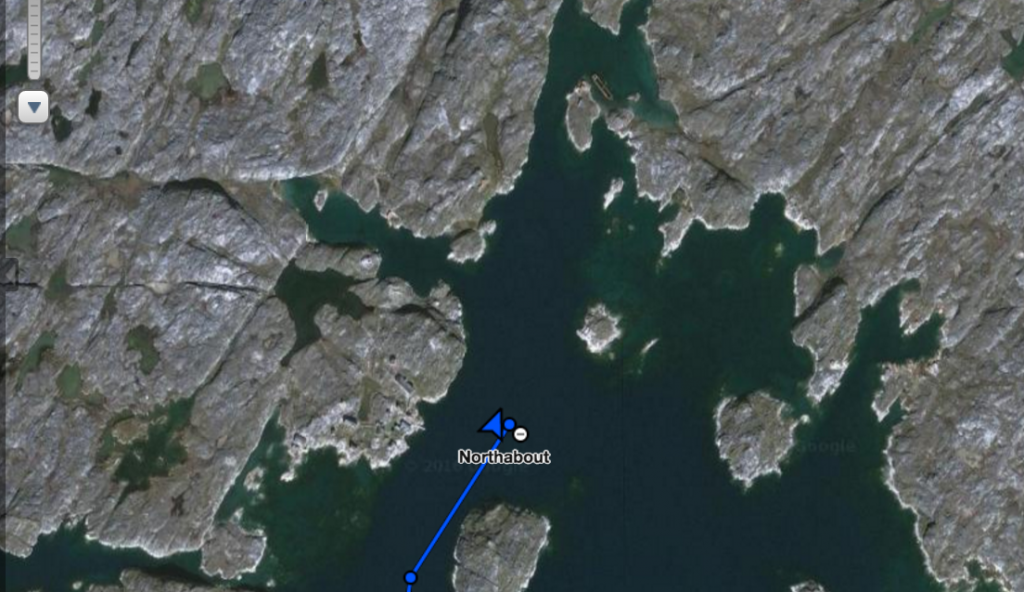 With the departure of the very able and experienced Arctic Skipper Nicolai, I was very pleased to be given the opportunity to commence bringing NORTHABOUT and crew, safely home to England. To complete her circumnavigation of the North Pole in one season. You’ll be hearing from me every day of our big Atlantic crossing. We have decided to approach things in a relaxed manner, and for the first few days, at least, we will day sail southwards amongst the islets and channels towards our departure point, in a sort of ‘shake down’ period, to get used to each other and our vessel, we will head for a remote weather station on the very south east tip of this vast and forbidding Island. More to say on that later..

Our home for this, our first night, as a complete crew is at anchor next to a tiny abandoned port named FAERINGEHAVN. Old dead wooden whalers, ribs now showing, and sad broken down port buildings, minus roofs, are our view of the shore less that 50m away. Have a close look at the top of this image, or zoom in on the tracking on the satellite view (Aerial its called). We are snug in around 8 meters of clear water, and as the anchor came up after the first attempt, we saw all sorts of brown and orange kelp and seaweed, (and apparently, something live and wriggling, obviously shocked and irritated to be hauled to the surface) obviously life is abundant on the seabed here despite the cold water (the sea temp gage at my right shoulder shows, 4.9C. far to cold for a swim for a Kiwi!)

As I write I am overhearing conversation as wide ranging as politics, geography, meteorology, economics, aboriginal history, and chess!

Time to go.., we have visitors! EAGLES QUEST II crew,  (a Hong Kong registered Tayana 58 who have sailed from via Alaska), decided to tag along for a while are on their way over for a brew..

We wish the new crew of Northabout “bon voyage”!

In our latest article on your Polar circumnavigation we point out that the by then ex Hurricane Karl will be brewing up some big waves in your path, and that the Greenlandic name on the maps for your current port of call is Kangerluarsoruseq:

Thankyou for your never-ending knowledge!

Welcome aboard, Mr. Stewart and the Atlantic crew, if a landlubber can say that! 🙂