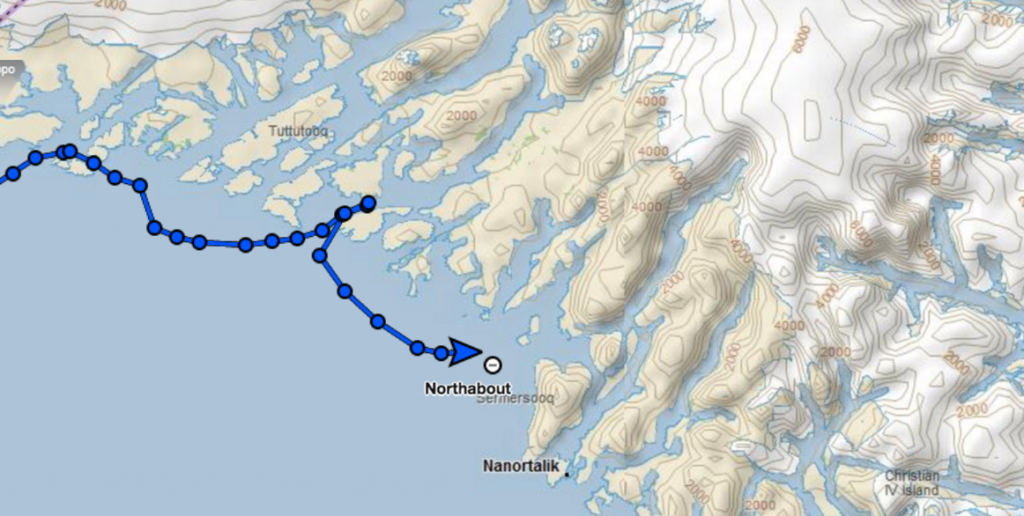 The strategy is to reach our departure point on the eastern entrance to PRINCE CHRISTIAN SOUND, which has a conveniently manned weather station and pier, in about two days sailing

After departing QAQORTOQ around 8 am, we headed in a steady plod at 6 knots under engine south then east towards our planned overnight anchorage. The strategy is to reach our departure point on the eastern entrance to PRINCE CHRISTIAN SOUND, which has a conveniently manned weather station and pier, in about two days sailing. This will allow us to hold in a safe area, whatever the weather in the Atlantic, and be in an ideal location to depart immediately to sea when the storm that is dominating the north atlantic abates. After crossing biscay 4 times this year, i have learnt that after a blow, kind of ‘riding on the back of it’ is an ideal time to head off. I recall something about the Chinese ideogram for chaos and opportunity being the same written character..and as we have 3 Chinese sailors around half a mile behind us right now, ill use that to describe the general strategy I have in mind. Actually looks good for a tuesday pm departure into decaying westerlies around 30-35 KTS.

Most of the energy will have hopefully eroded out of the system and usually a more stable and orderly set of isobars, follows on before the next low system, ideal for rolling east under headsail, knocking off the miles towards England. As I’m starting to sound like a Michael Fish weather report,  (and we know how that ended…) I will leave it at that!