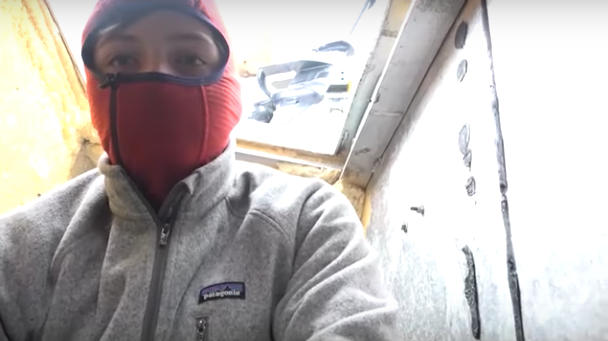 If there’s one thing this trip has taught me, it’s how to wait.

So we left Tuk yesterday.  As usual we left during my watch.  It’s extraordinary, the only time we’ve left a place not on my watch was when we left the stamukha for the last time.  I assume there must be some kind of conspiracy against me, possibly the CIA.  So far we’ve been very lucky, we’ve had following winds ever since we left and have been doing over seven knots most of the time.  We’re at one hundred and twenty six degrees at the moment, when we reach one hundred and twenty we’ll be two thirds of the way round.  Exciting prospect, we’re almost done.

In light of the lack of ice and in the spirit of saving time we’ve decided not to stop in Cambridge Bay or Pond Inlet and go straight on to Upernavik in Greenland before doing our crew change. Looking at the ice maps at the moment it seems we’ll be able to get through with little or no trouble, though this is almost bound to change, if it stays that way we’ll reach Upernavik in about fourteen days.  I’m looking forward to it!

As we’ve gone east over the past two days things have been getting much colder remarkably quickly.  The water temperature has dropped by five degrees and though I’m not sure of the numbers for the air temperature it certainly feels a lot colder.

If there’s one thing this trip has taught me, it’s how to wait.  Not patience mind.  I’ve never been good with patience, as far as I’m concerned there’s almost always something else to get on with while you’re waiting.  Just sitting patiently comes across as a waste of time.  What this trip has taught me is when you’re on watch, other than looking out for ice and so on, there is very little else you can do that’s constructive.  As such I have found two pastimes that really help occupy you through your dull uneventful watch.  The first is trying to remember songs.  I tend to remember tunes rather than words in songs, so for any that I know the tune to it can be quite fun reconstructing the lyrics and then trying to alter the tune to improve it.  That doesn’t happen very often I’ll admit.

The second is words.  I’ve done French Spanish and Latin in school and I know the occasional word in a number of other European languages and while Latin is more or less useless in real life it is very helpful for working out the roots of words.  For instance: supercilious, meaning to feel superior.   Latin derivative, superciliosus, meaning haughty, from supercilium, eyebrow.  From this, super, Latin, above, cilium, one must assume eye.  From the Latin the possible original meaning of haughty( superciliosus) means above the eye.  Could be interpreted from there as looking down on so supercilious: above the eye, capable of looking down.  Most of that is probably rubbish, I’ve almost certainly misremembered something or taken it to its illogical conclusion but at least it keeps me occupied.  My watch has just finished and I’m feeling cold and tired so I’m going to go and sleep now, I’ll write again when I can, bye.

…and also to write so we can follow your adventure and be part of it. Thanks Ben.